The mad panic at the end

This is the last week that we have for finishing work. And it’s been such a hassle. It’s been really stressful and I’ve been feeling as if my work is not of good enough quality to display.

I spent a lot of my time trying to figure out laser cutting the boxes so that an iPad would fit in there, and they would still be a good size for the models. I made them with finger joints that I’m quite proud I managed to figure out on Indesign. 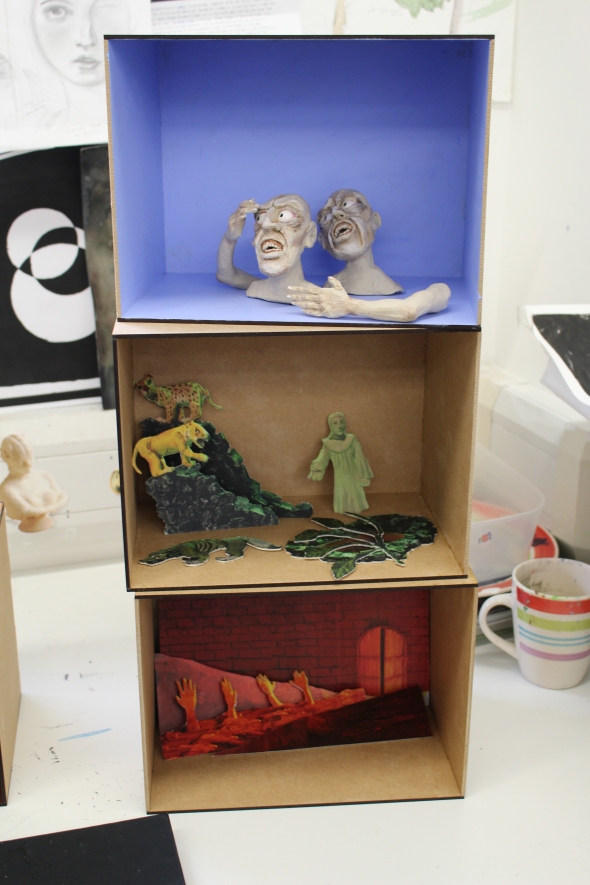 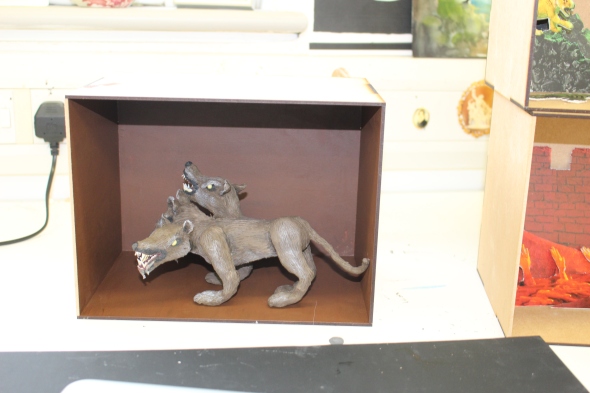 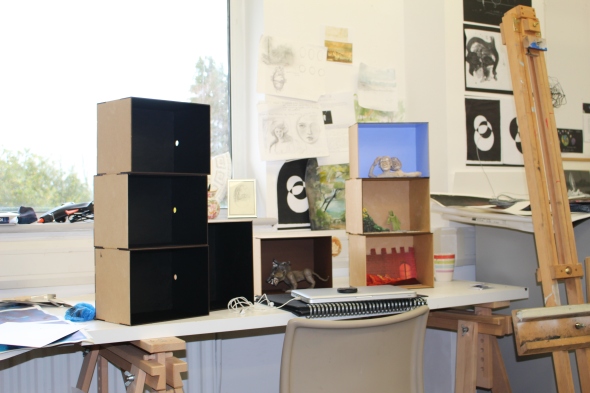 These are some pictures of the boxes as they were a few days ago. The black boxes are for the iPads. They have holes in the side for the wires, and I will make some frames to cover up the sides of the iPads. I’m hoping that the colours are going to all work together.

This is the animation I made for the part of the story where Dante and Virgil travel across the River Styx, and into hell.

I’ve tried again to subtly incorporate the shape of neutrons, hopefully along with the water, it looks a bit like he’s travelling through a brain. I didn’t include Dante in this scene, even though he is present in the boat. I wanted the viewer to feel like they were Dante. Dante very much takes on the role of spectator and judge in the poem, and I want the viewer to feel the same.

The lantern is also present because it hopefully it helps to paint the picture of the superego as a kind of moral force, trying to control the less moral urges of the subconscious.

This part of the story is really about delving into a journey.

This gif is to represent the FRAUD level of hell in Dante’s Inferno. I think I might redo it. I do like the set, and how the feet are moving, but I also think that it could be a little better. If I get time to re do it, I would change the lighting, how Bertrand is holding the head, the mud around the feet, and the stance of the body.

The man holding his own head is called Bertran de Born in the poem. Bertran is singled out by Dante as having a punishment that particularly mirrors the sin. He caused a rift between the King and his son, and as that relationship was divided, so now is he. This goes back to the cautionary tales that I looked at in the first and second term, and also speaks of how the subconscious is also split.

Again, feet, hands, and head are key to this image, but also cut off. They seem to be swallowed by the scenery. Submerged, fighting against the id.

A Visit to Grayson Perry’s The Vanity of Small Differences

We had a trip yesterday to Bath to see Grayson Perry’s tapestries at the Victoria Art Gallery. They were really very impressive, and actually very funny. Me and Ross discovered they all had a little symbol of an anchor with W above it, hidden within them, which we had a lot of fun finding. 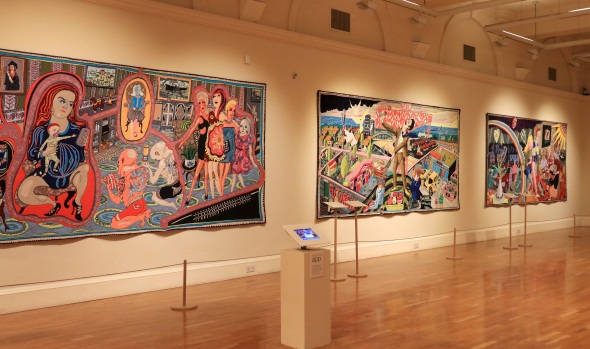 I think this trip happened at just the right time for me. I was really struggling with how I wanted my work to look, and how I wanted to speak, and just by seeing  an actual exhibition, it gave me a little more confidence.

This has given me a little confidence boost as well, that there is a little backing up my project!